Born on 18th February 1742,  John Morgan was one of five children and the third and youngest son of Thomas Morgan and his wife, Jane Colchester. As a teenager, he seems to have enjoyed the life of a wealthy young man living in London. He was very sociable and well-liked with sophisticated interests. John was regarded as an academic with a particular interest in antiquities and is known to be a keen collector of ancient coins.

He followed many of his ancestors into the House of Commons, succeeding his brother, Charles Morgan, as Member of Parliament for Brecon on 15th May 1769. Following in his brother’s footsteps, in 1771, he accepted the Stewardship of the Manor of East Hendred to enter the by-election at Monmouthshire, replacing his late eldest brother,  Thomas.  Unusually, given the immense Morgan influence in  Brecknockshire and Monmouthshire, the election was contested.  Valentine Morris stood against John and lost by 535 votes to John’s 743.

As a younger son, John’s main home was Rhiwperra Castle; while living there in 1785 there was a devasting fire causing substantial damage to the elegant interior. For the next four years, John oversaw the rebuilding, employing architect, Thomas Hardwick, who replaced the gables to the south and east elevations with the castellated parapets we see today in the castle’s ruined state. 1

In 1787, John had great hopes of becoming Lord Lieutenant of Brecknockshire a role previously held by his brother Charles. However, this prestigious position as the King’s representative for the county was awarded to his arch-rival, Henry Somerset, 5th  Duke of Beaufort. John seems to have taken this disappointment very badly. In a protest that prime minister, William Pitt, had not recommended him to King George III, he moved across the house to join the opposition to the Tory government.

On the death of his elder brother, Charles, in 1787 the unmarried John succeeded to the entirety of the Tredegar Estate. He brought with him a considerable fortune but he had also inherited an estate that was deeply in debt and he spent the remainder of his life working to restore its fortunes.

Being well aware that his brother Charles had failed to produce an heir, John had to take urgent action to secure the male Morgan line, so at the age of 45, he set out to find himself a wife. His search resulted in his marriage in 1788 to  Louisa, daughter of Charles Pym Burt and Petronella Heyliger (1742-1770). As Louisa was very much younger than himself there must have been great hopes of an heir.

Unfortunately, this was not to be and there may have been several miscarriages as “he was more than once disappointed; and she has, since his death, experienced her usual ill fortune …” 2 One pregnancy did run to full term though the outcome was another disappointment as reported by the Hereford Journal on 31st August 1791: “…the lady of John Morgan Esq, of Tredegar, in the county of Monmouth, was safely delivered of a son and heir, but we are sorry to add that the child died half an hour after his birth”.

On about 25th June 1792, John suffered a stroke shortly after arriving home at Tredegar; a second stroke occurred on the 26th and he died shortly after midnight on Thursday 27th June.

With his death the male line became extinct. However, in his will, John had imaginatively resolved the issue of the succession by making his sister, Jane Morgan, the final heir of Tredegar on condition that her husband, Sir Charles Gould took the Morgan name. 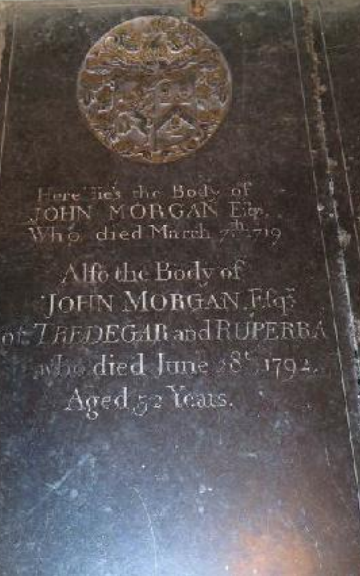 Sir Charles, a formidable businessman, had been actively involved in life at Tredegar, supporting both Charles and John Morgan through their financial difficulties and the legal arguments with William and Elizabeth Jones. Not only did his inheritance place Tredegar into his safe hands but was just reward for the help and assistance he had given the Morgan family over many years. 3

John Morgan is buried in the Morgan Chapel, sharing his grave with his grandfather John Morgan of Tredegar d. 1719. Above the fireplace, there is also a small memorial plaque for this John Morgan, adjacent to a similar one for his brother Charles.  The Arms are a quartering of 9 Impaled with the Burt Arms comprising a red chevron with three golden heraldic crosses on a silver background with three hunting horns.