Charles Morgan “of Dderw”, second son of  Thomas Morgan, succeeded his elder brother Thomas as MP  for Brecon in 1763. He was High Bailiff of Brecon in 1768, and a Lieutenant in the Foot Guards in  1769. That year he wished to succeed his late father as Member for Brecknockshire, but as was the case with his brother Thomas in 1763 he could not resign his Brecon seat to stand in the by-election. However, he used a similar device to that used by Thomas. This time, his appointment to the  “Stewardship of the Manor of East Hendred” was used on 15th  May 1769 to obtain the release. 1  He then won the 1769 Brecknockshire by-election and represented the county until his death.

In 1771, on the death of his elder brother, Thomas Morgan, Charles inherited Tredegar and succeeded his brother as Lord Lieutenant of Brecknockshire. However, by this time the estate was in a parlous situation due to a failure to collect rents for nearly two years, poor management,  family discord and legal disputes.

Charles was good friends with his brother-in-law Sir Charles Gould who was actively involved in life at Tredegar and supported Charles Morgan in the drawn-out legal arguments with William and Elizabeth Jones of Clytha.   While he was the custodian of Tredegar, William and Elizabeth Jones were finally forced to relinquish their claim to the estate. However, the years of legal wrangling had taken a toll on both Charles and the estate finances leading him to write in 1773:

“…at present £200 a year is a mite I can’t well spare, and I dare say you will think my estate large but my income is small to maintain it as it has been…the situation…has rendered me so even as to have borrowed to pay the interest I have already paid Mrs Hanbury… [and] to pay Lady Rachel her jointure of £2,000 a year. Now I am obliged to pay Mrs Jones a per cent for £20,000, all the arrears of all the estates my brother left…the whole estate does not amount to upwards of £7,000.”

In 1767 Charles married Mary Parry, the daughter of Thomas Parry of Arkstone, Herefordshire and the wealthy widow of Robert Mynors Gough of Treago. The couple lived at both Tredegar House and Mary’s home at  Treago Castle, a fortified manor house in the Parish of St Weonards, Herefordshire. Mary died childless at Brickendonbury, one of the Morgan family seats in Hertfordshire, on 24th June 1777 at the young age of 42.  Charles outlived his wife by nearly ten years, he too dying prematurely at the age of 51. On his death, his estates passed to his younger brother, John Morgan. 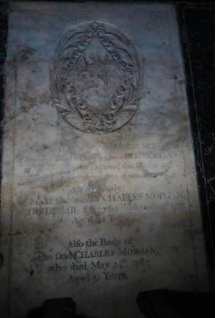 There is no ornate wall monument for Charles, merely a plain white memorial panel and an armorial plaque displaying his family arms with the Parry arms in pretence.