Katharina Morgan was the youngest daughter of Thomas Morgan of Machen & Tredegar and his wife, Elizabeth Wyndham and younger sister of John Morgan (The London Merchant). Born in 1651, she was one of fourteen children.  Katharina died on 29th July  1724 and her burial is marked with a large white Carrara marble ledger slab with an oval low relief carved shield with the Morgan griffin arms with mantling to the head. The grave is shared with her great-great-nephew Charles Morgan (d.1787) and his wife Mary (d.1777). 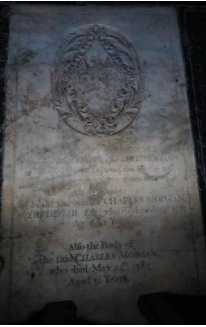 We know very little of her life though she never married and seems to have lived at Tredegar and Rhiwperra.    When John died in 1715,   he left his estate to his nephew another John Morgan, but  Katherina was provided for as she received the income from the Rhiwperra estate until her death.

A story often told at Tredegar is that Katherina ‘died’ c.1670 at about 18-years old, and quite remarkably outlived all the mourners that were scheduled to be at her first funeral by about 55-years! It seems that she had suffered a serious fit and there was no sign of life.  Later her funeral procession from Rhiwperra to Lower Machen Church for burial had to turn back as the River Rhymney was in flood and they could not cross the bridge at Draethen. Back at the Castle, her coffin was laid down on the floor of the Great Hall and to everyone’s surprise, she sat up, not dead at all! 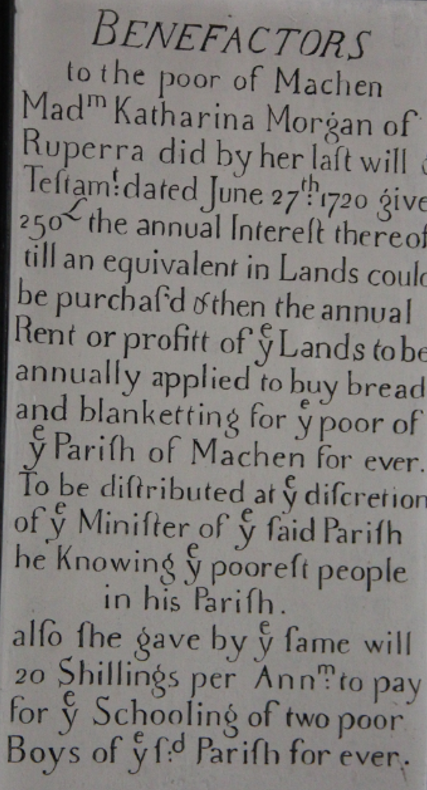 The “Benefactor’s” plaque on the north wall of the nave remembers Katharina for her bequest to use the profits from the estate to “buy bread and blankets for the poor of the Parish of Machen for ever” and for giving “20 shillings for the schooling of two poor Boys of the Parish for ever”. No doubt this was a generous gift in 1720, but now seems very inadequate in the 21st century.