The John Morgan wall tablet and monument located to the side of the entrance arch is by Edward Stanton of London (1681-1734) and was probably installed in 1717 (when Stanton was paid).

The memorial is predominantly white Carrara marble from the Tuscany region of Italy with a black painted limestone backing panel bordered by a thick black mourning band painted directly on to the wall.   The decorated base of palm fronds with scrolled outer brackets sits above two carved cherubs’ heads. Above the string course, scrolled mantling flanks the fluted columns, which support a semi-circular arched pediment, with two mini gadrooned and fluted finial urns. 1

In this Place
Lies interr’d ye Body of
JOHN MORGAN
Of Rhiwperra Esqr.,
Late of LONDON Merchant;
Who departed this Life
The 1st. of January. Anno. Dom: 1715.
In the 75th. Year of his age.
He was 4th son of THOMAS MORGAN
of MACHEN Esqr. By his wife ELIZABETH
Daughter and Heiress of FRANCIS WINDHAM
Of SANDHILL in ye County of Somerset Esqr.
And one of 14 Children, 8 of Which
Ly Buried here.
Here also Ly Buried
Charles, John, & Lewis, 3 Sons

Of his Nephew & Heir: JOHN MORGAN of TREDEGAR Esqr.

The monument is capped with a marble helm with a gilded stag’s head above an elaborately decorated escutcheon (shield) quartered with no less than fifteen armorial “badges”.  Three of these are the arms of the 11th century Welsh chieftains from which the Morgans claim noble or even royal descent and can be seen on other monuments and hatchments in the church.

The first and last arms are those of the Morgan family depicting a black griffin with both forelegs raised on a gold background. Next are the three bulls’ heads on a silver background for Bleddri ap Cadifor Fawr (1060-1120), a Welsh chieftain and landowner in west Carmarthenshire.

The third with its golden rampant lion on a red background is for Meredith ap Bleddyn  (1047 –1132), who was a prince and later King of Powys, who was the son of Bleddyn ap Cynfyn (died 1075),  King of both Powys and Gwynedd.

The fourth badge comprising a  wild white or silver boar with a red head and gold collar and chains under a holly bush is for Llwch Llawen Fawr (C.1000-1090),  Lord of Cil-Sant, (north of St Clears) Carmarthenshire.

The Wyndham arms comprising a gold chevron between three golden lions on a blue background is displayed in the penultimate position on the bottom row are for John’s mother.

The arms at positions 5-13 seem to be included to exaggerate John’s importance and claims to noble lineage. It is quite likely that these arms are those of other families which John’s more distant relatives married into but which he has only a dubious right to claim any descent.

John was the son of Thomas Morgan (d.1664) and his second wife Elizabeth Wyndham, daughter of Francis Wyndham, Sandhill Park, Bishops Lydeard, Somerset. He was born c.1640 and one of 14 children which Elizabeth gave Thomas, though most would have not survived infancy. John’s monument refers to “8 of Which Ly Buried here” possibly meaning elsewhere within the church as the dates of death, where recorded,  predate the chapel’s construction. Sadly no graves have been found. John’s eldest brother, who predeceased him in 1680 was responsible for completing the rebuilding of Tredegar House.

As the fourth son, John would have been expected to make his way in the world, which for him, and indeed for the future of the Tredegar estate proved to be no bad thing.   In his twenties, John was given an annuity of what seems a modest £50 in his father’s will (maybe £10-20 thousand at 2020 prices), which he took to the City of London and embarked on a career in commerce. 2

John invested wisely in maritime shipping and overseas trade which were booming in the 17th century. Through his success, he quickly became known in Wales as “the London Merchant”. In 1676 he acquired a quarter share in a ship named “Guift” and another called Dolphin Pinke which were chartered by the Royal Africa Company. Over more than 25 years he subsequently took between 1/6th   and 1/16th part shares in at least five other ships trading with the West Indies, Africa and the Mediterranean. 3

Not a great deal is known of John’s mercantile activities, though there can be no doubt that at the time foreign trade was not without severe risks on the high seas. For instance, during the Nine Years War with France (1688–1697),  merchant shipping came under attack from the French fleet acting against British and Dutch commercial interests. At this time the French government also hired privateers who typically attacked allied shipping using armed raiding ships that disguised themselves as non-combatant merchant vessels. 4

John the London Merchant was also lesser-known as the Smyrna Merchant as he was heavily committed to the Mediterranean trade routes, including to Smyrna in modern-day Turkey, which was at risk from  French naval attacks.  In the late 17thcentury mercantile trade with Smyrna, Constantinople and other eastern Mediterranean ports would have included a large range of British exported goods such as woollen textiles. More valuable cargo including currants. spices, raw silk and carpets would have been carried on the return journey. 5

John is on record in joining with Sir Joseph Herne, and others in petitioning the Government to deploy a man-o’-war to protect merchant shipping trading with the Mediterranean ports. This petition was prompted by an incident on the 27th  June 1693 when a fleet of up to four hundred English and Dutch merchant ships heading towards Smyrna came under attack from over fifty French naval vessels off the coast of Portugal. 2 About ninety merchant vessels were sunk or captured by the French. This was one of the greatest financial disasters suffered by the City of London bringing about insured losses of around £1 million, or 2% of estimated UK GDP at the time.  Even though the merchants would have paid war-time insurance premiums of 25% of the value of the ships and cargo the impact on Lloyd’s underwriters was disastrous with at least thirty-three being made bankrupt. 4

It is not clear whether John lost any of his ships or cargo during the Smyrna Convoy venture but it is apparent that even if he had, he was still able to amass a huge fortune from his mercantile activities. He used some of this wealth in 1700 to redeem a mortgage taken out by his brother, William (now deceased), paying John Jeffries of London £1675 (about £367,000 at 2020 prices).

His other spending on property moved to a completely different level when John sought a home in the Welsh countryside for his retirement from London. Plas Machen, the historic Morgan mansion may have been his first choice but by this time the family had moved to Tredegar and the Plas was now tenanted. So he turned his attention to Rhiwperra which he bought for £12,400 in 1704.6 In cash terms, this would be about £3 million in 2020, though at current land values the 3000-acre estate could today be worth more than £20-25 million.

John‘s purchase of Rhiwperra returned this valuable estate to the Morgan family after an absence of 51 years. Between 1642, when Thomas Morgan who had rebuilt the mansion died, and 1706 Rhiwperra had changed hands several times. On Thomas’s death the estate was inherited by his grandson, also Thomas Morgan, because his son and heir, Sir Lewis Morgan had died unmarried in 1635.

When the younger Thomas then died childless in 1655 Rhiwperra passed to his elder sister,  Elizabeth who had married Edmond Thomas of Wenvoe in 1652. The estate was relegated to a secondary residence under the ownership of the Thomas family who made Wenvoe Castle their principal residence. Elizabeth and Edmond had a son, William but both father and son died in 1677.

On William’s death, he left a young widow who was the Honourable Mary Wharton (d.1699), daughter and co-heir of 4th Lord Wharton. The couple had a daughter, Anne (b.1675)  and a son,   Edmond (b.1674),  who at the age of three succeeded his grandfather as the owner of Wenvoe and Rhiwperra.

For a time Mary managed both estates as trustee for Edmond, her infant son before in 1678, marrying Sir Charles Kemeys, 3rd Baronet, bringing his estate at Cefn Mabley together with Wenvoe and Rhiwperra. Edmond died unmarried in 1692 and Anne, his sister in 1694, both before reaching the age of majority, The Estates then devolved upon their great-aunt, Elizabeth Thomas, prompting family disputes over the ownership of the landholdings.  The dispute over Rhiwperra was however resolved in 1706 with John Morgan’s purchase of the estate. 7,8,9

In 1710 John paid £9,000 (about £1.55 million in cash terms in 2020)  to purchase the lordship of Gwynllwg (Wentloog), which the Herbert estate was required to sell by decree of the High Court of Chancery to settle the debts of the late Earl of Pembroke. 10

With this acquisition, he increased his status in Welsh society by becoming Lord of most of the 17 lowland manors situated between the Rivers Rhymney and Usk including Newport, St Mellons and Bassaleg.  Being Lord of the Manor did not give John outright ownership of this significant area of land, but it did give him manorial rights of hunting, shooting and fishing and most significantly the valuable right to extract minerals.

Apart from his commercial interests John followed in the Morgan traditions of public service and was appointed High Sheriff of Monmouthshire in 1697  serving under King William III.

He was elected in 1701 to represent the  Monmouth Boroughs in the House of Commons becoming one of three Morgans in that Parliament. In the 1705 general election, he abandoned the borough to join his nephew, another  John Morgan, in contesting the county but was narrowly defeated by Sir Hopton Williams.  He chose not to stand in the 1708 election or ever again. 2 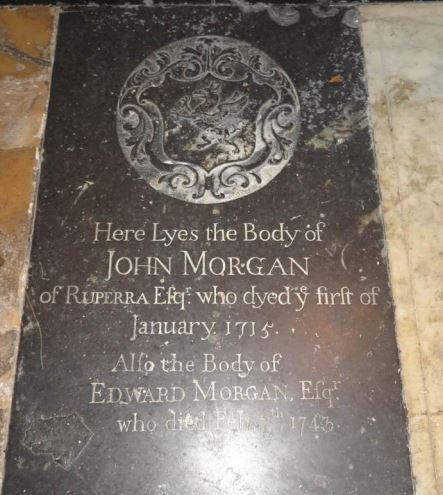 John Morgan died on 1st January 1715. He never married and left a life interest and the income from the Rhiwperra estate to his youngest sister, Katharina. His lands and manorial rights were bequeathed to his nephew John Morgan, whereupon they became absorbed into Tredegar Estate.

He rests in front of the Chapel altar, his grave marked with a large black crystalline limestone ledger slab with a circular low relief carved “Morgan griffin” shield to the head.  The inscription commemorates his death in 1715 and also that of his great-great-nephew Edward (1727-1743), younger son of Sir William & Lady Rachel Morgan.